As I begin the last year of “Chapter One” of my life, I couldn’t think of a better way to cap off the day’s amazing events to year number forty-nine?

In fact, the timing couldn’t have been better than my worst nightmare – it was ingeniously iconic to speak. When it comes to companionship, conversation and thirty-years of friendship, life becomes more intelligent than E.T. calling for a ride home to his own planet.

Friends for more than thirty-years, Kevin Stacy, started playing music as long as he can remember, he spent much of his teen years being addicted to music. When I say music – I’m talking about recording and performing and the likes – the guy is an iconic master at songwriting and an expert drummer, who seems to manage the rhythm of music, as if you were trying out for the Atlanta Braves or the Oakland Athletics baseball clubs during the annual spring recruiting season. 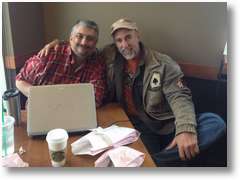 Evidently – my first fifty years seem to be nearly written into “Chapter One” has it comes to a close in 364 days in 2015.

I couldn’t have been more acclaimed and polished, as I envisioned life along the red carpet – no, I was not getting an award, but an award of lifetime friendship and love from a high school best friend, who actually capped the day’s lifetime achievements into a sensation of generosity, companionship to new heights and daring sights which are likely to be written, tried and trued as Chapter One begins it’s historical closure of the first fifty years of my own life.

Could this be the year of the novel? A feat that would bring the chaotic pains of writing a novel into the twilight and a overdose of excitement to compile the feat of turning words into print and print into words and vise versa – only time will tell if the margin of error actually happens?

Literally – a feat that is yet to be seen in the greatest minds of writing.

This site uses Akismet to reduce spam. Learn how your comment data is processed.